Thirty-three community college students spent the summer working on research projects with CECS faculty, as part of the college’s AIMS2 program. But their work wasn’t quite over when the ten weeks of research ended. The culmination of their efforts took place on September 14, when they presented their project findings at the second AIMS2 Research Symposium.

The purpose of the symposium was twofold: 1) to encourage participating students to remain in engineering and computer science by providing them with hands-on research opportunities and 2) to inspire and motivate them by experiencing the entire research process, from picking and working on a topic to analyzing data, organizing their conclusions and presenting their work to an audience. Students presented posters about their research and also made oral presentations, following standard guidelines for conference presentations.

“It’s what you would see at any technical or professional conference,” says CECS dean S. K. Ramesh.

“The program has had really tangible effects,” Ramesh observes. “How many undergraduate students have had peer-reviewed papers accepted at prestigious journals?”

The breadth of the AIMS2 projects is reflected in the following summaries.

When it comes to aviation, lighter, more efficient materials for aircraft are the holy grail. In the Airbus A350, for example a lithium aluminum alloy was used that enabled the company to reduce the weight of the aircraft by about 15-18 tons. Students working on this project investigated the properties of two high-strength aluminum alloys used in aircraft—the conventional aluminum alloy used in the aircraft industry and the newer, lighter lithium aluminum alloy used by Airbus. Dividing into two groups, one focused on heat treating and mechanical properties and the other at microstructure and corrosion resistance, they were trained to prepare samples, use universal test equipment, use microscopes and do metallographic analysis. They explored the effects of different heat treatment conditions on alloy performance and demonstrated that the lithium aluminum alloy was superior to the conventional alloy. 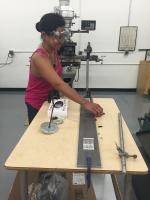 David Boyajian and Tadeh Zirakian were determined to improve the AM 317 Mechanics Lab course for civil and mechanical engineering students, by introducing new experiments. To lay the groundwork, they set two AIMS2 students to work designing and building a single-story, single-bay portal frame that was loaded vertically and laterally and equipped with measuring instruments to collect information about strain and deflection. The students began their project with a literature review and then started purchasing different elements needed to make the portal frame in order to construct various structural modules. Once the students had made the frame, they then loaded it and collected experimental data. They not only learned the basics of mechanics from analytical, numerical and experimental standpoints but gained valuable experience with instrumentation and helped Boyajian and Zirakian make considerable headway toward improving the quality of the mechanics lab instruction experience.

Advances in in technology have produced a push for better and more efficient drones. But in order to design improved aircraft, it’s critical to know how they behave when they fly. While data exists for large, conventional aircraft like commercial and military planes, drones fly very slowly by comparison, and no one has examined comparable data for them. For this project, a team of students used the college’s low-speed flow visualization water tunnel facility to make experimental measurements on thick and thin airfoils to determine which works best at low velocity. They studied the force and moment characteristics of the different airfoils at low Reynolds numbers, as well as correlated the steady and unsteady flow structures over airfoils with instantaneous load characteristics.

Flow visualization is an essential tool in experimental fluid mechanics research because it allows for the characterization of complex fluid dynamics phenomena and development of a deeper understanding of the physics of flow. In this project, flow visualization images were used to identify the point of flow separation on an airfoil. A separation point is defined as a location on the airfoil where the fluid flow becomes detached from the surface. It is important to gather this information because if the flow separates on the airfoil very early, an aircraft will lose its lift. To automate the separation point detection, the students wrote a program in MATLAB and tested it to ensure overall robustness and accuracy.

Even if an engineer has no intention of becoming an entrepreneur, there is enormous benefit to developing an entrepreneurial mindset—to considering how a technology or other innovation adds value to an organization, for example, whether it’s a small startup or a Fortune 500 company. For this project, the student conducted a literature review on innovation and entrepreneurship, drawing on professional journals and industry magazines, and once she had identified the necessary skills, she correlated them to the engineering profession and produced a paper. 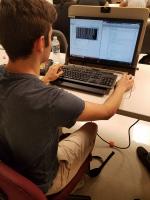 In the aftermath of a disaster such as an earthquake, hurricane or wildfire, where roads into the affected area are impassable and communication has been disrupted, airships, remotely controlled, can be a viable and cost-effective means of visualizing the area, gathering data and reconnecting communication networks. Unlike a helicopter or fixed-wing aircraft, airships require no crew members, are stable and robust and can remain in place indefinitely. For this project, a student used Particle Swarm Optimization Methodology (PSO), a population-based random search optimization, to identify controllers to control the airship’s speed and altitude. The technique allows for a quicker and more detailed search, and based on a couple of simulation results, it achieved better performance with fewer iterations. 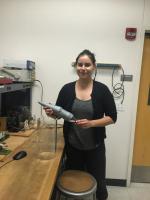 When it comes to instilling an interest in STEM fields, the earlier students are engaged, the better. That’s why the aim of this project was to introduce STEM fundamentals at the elementary level instead of middle school and high school. The team of five AIMS2 students was charged with developing ten enjoyable and captivating projects to teach STEM concepts to 3rd and 4th graders. Among the projects was a keyboard created on paper that was then wired to play music, and making ice cream. Every concept from math, physics and chemistry, was introduced twice. The next step will be to demonstrate the activities in an elementary school and train the teachers to introduce them at a summer camp. 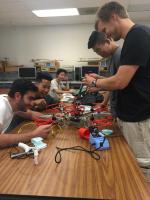 Off-the-shelf drone kits are a dime a dozen, but a team of AIMS2 students working with Vidya Nandikolla gained unique insight into the technology behind the unmanned aircraft when they designed and made their own drone from scratch, complete with camera and navigation technology. Divided into teams based on discipline and function (mechanical engineering, electrical engineering, programming, testing and mechanical design), they designed the drone in Solidworks, then built all the parts but the electronics in house. The team learned from the experience of the previous year’s AIMS2 drone team, taking apart their craft and fixing its faults. The drone that resulted flew, but was so heavy that it couldn’t fly high.

“It was a good experience because these kids had never dealt with anything like it before,” says Nandikolla. “It was the first time they had built anything from scratch, from design to making something fly. It was hard for them initially because they had no idea how to do machining. But they did it, and it was a good project.”

Electric cars have become big business, with car sales increasing by 50% in 2015 alone, accompanied by a boom in the demand for associated components. At the heart of electric and hybrid electric cars are electric speed drive technologies. The four students working on this project conducted research on existing technologies, focusing on three areas: electric motors, energy storage systems (batteries) and impact on the environment in the form of CO2 reduction. They spent the bulk of the summer trying to understand how the system works and how vehicle manufacturers implement it, starting with a literature review. In the lab, the students ran several simulation experiments to determine the control and capacities of different energy storage systems and came up with recommendations for the best approaches. First, they concluded that lithium ion batteries, while pricey, were the best solution for distance because they have large energy storage density. And second, they recommended considering other technologies, such as hydrogen and fuel cells.

Currently, every packet sent over the Internet goes through numerous routers and intermediaries until it gets to the intended receiver. While routing the traffic, these intermediaries (referred to as middleboxes) have the potential of making significant changes to what happens to a traffic stream on the network. During the past decade, a wide variety of middleboxes have been proposed, implemented and deployed, and middleboxes are becoming a common element of various types of networks, making their detection by end hosts beneficial and in some cases crucial. For several years, Vahab Pournaghshband has been conducting a major research project designed to detect what happens to packets sent over the Internet, particularly to identify net neutrality violators. For this AIMS2 project, two students wrote a script to automate the process of running multiple experiments to fine-tune the best parameters that can be used to detect middleboxes. They successfully completed the script and were able to validate it for a certain set of parameters in order to detect these two intermediaries.