CSUN satellite at the final frontier 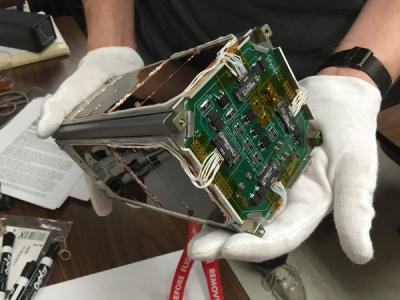 Sometime soon, an unmanned spacecraft will be launched from Earth, headed to the International Space Station. Once it arrives, the space station’s astronauts will remotely open the doors on the craft and release into orbit space six small satellites called CubeSats, each about the size of a shoebox. One of those will be CSUNSat1, the culmination of 2½ years of work by electrical and computer engineering professors Sharlene Katz and James Flynn, emeritus professor David Schwartz, computer science professor Adam Kaplan and some 70 students, as well as colleagues at JPL. The CSUN team built and programmed the satellite and ground station, while the JPL group built the payload. Once CSUNSat1 is in orbit, the ground station, with its antenna installed atop Jacaranda Hall, will communicate with the satellite, run experiments for JPL and collect data.

“NASA won’t trust a mission to anything that hasn’t already been tested in space,” says Katz, who along with Flynn served as co-PI on the project. “So the purpose of this is to validate an energy storage system that will help NASA venture farther into the solar system and carry out more scientific investigations.”

Currently, the batteries that run spacecraft traveling past Mars need heaters in order to remain operational because it’s extremely cold that far from the sun. Heaters, however, use energy, depleting the batteries. The energy storage system on board CSUNSat1, by contrast, will function at very cold temperatures without needing a heater. JPL, which designed the system, has tested it in the lab, and the CSUNSat1 experiments will constitute its test in space.

The project had its origins in a 2013 design clinic with JPL to learn about CubeSats, and as part of that effort, CSUN and JPL collaborated on a successful proposal to NASA for $200,000 to fund the current program. Word about the project quickly spread, and student response was overwhelmingly enthusiastic, with electrical and computer engineering, mechanical engineering and computer science students all working on different aspects of the design. Most were seniors using the experience as their senior design projects, but others were graduate students, and the allure of space was so strong that a few volunteers signed on as well. 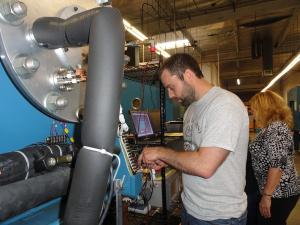 “We had more students than we knew what to do with,” Katz says. “It was like an engineering department where every six months half the company leaves. Then we got brand-new people who had never done anything.” Most who worked on CSUNSat1 quickly found jobs, at JPL and elsewhere.

Once CSUNSat1 was completed, however, it wasn’t a given that the satellite would be given a free ride into space. That required another competitive application to NASA. Fortunately, CSUN was successful and the satellite won a slot on the craft heading to the space station.

While CSUNSat1 is in orbit, the CSUN-JPL partnership will continue, with CSUN responsible for monitoring the health of the spacecraft. If things are going wrong, Flynn explains, the CSUN team will fix it. Students will be involved in collecting data, but it will mainly be shipped to JPL for analysis and will perhaps generate new experiments.

The name of every student who worked on the project has been inscribed on a heat shield located between the payload and main part of satellite, along with the names of the four faculty members and a return address in case the craft is found. That isn’t likely, however, since the bulk of the satellite’s work will be done within a month, and it will run until it burns up, probably in a year or two.

Until then, however, it will be communicating with Earthlings in two ways—by transmitting data to the CSUN ground station and via a Morse code beacon that every three minutes identifies the satellite and reports its health. Anyone in the world with a $100 radio can listen in on the latter, and the advantage is that someone who enjoys listening to satellites (there’s an entire international community of aficionados) can report to CSUN if something is wrong even when it’s not passing overhead and communicating with the ground station in Northridge.

“Years ago, it would have taken decades and millions of dollars, and now for a few thousand dollars, your project can be in space,” Flynn says.

It’s no surprise, then, that given the success of CSUNSat1, he and Katz are now in search of their next mission to outer space. 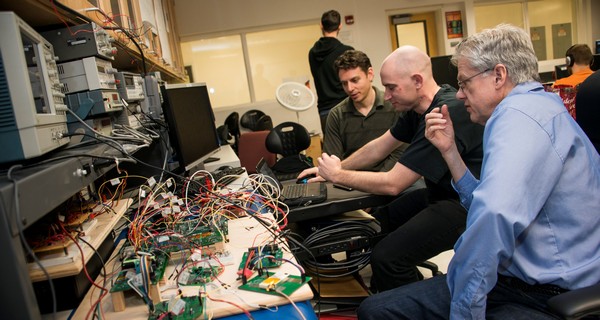