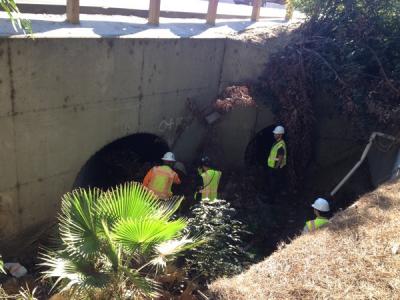 It’s no secret that the nation’s aging infrastructure is facing numerous challenges. Every four years since 1998, the American Society of Civil Engineers (ASCE) has been issuing its Report Card for America’s Infrastructure, and in that time, the nation has earned persistent D averages for the condition of its roads, bridges and many other essential structures, along with a host of other related civil engineering resources.

But over the next three years, a trio of CECS civil engineering faculty members will be chipping away at one of the issues—the state of California’s culverts, which are basically pipe- and tunnel-like structures used to divert water underneath roadways.

Sami Maalouf, Tadeh Zirakian and David Boyajian were recently awarded a grant of nearly $400,000 from Caltrans to conduct a study of 500 culverts throughout the state, with the aim of developing a new method that civil engineers can use to determine the service life of these structures. The culverts they will be investigating are known as corrugated steel pipes (CSPs), which have been found to be vulnerable to corrosion. Although Caltrans engineers have been using an existing service life prediction equation to assess the longevity of CSPs, studies have shown that these models are not particularly accurate. Maalouf, Zirakian and Boyajian, together with a small team of graduate and undergraduate students, will gather and analyze data over the next three years in order to achieve more accurate service life prediction models of the structures. Their end result will be a detailed report of their findings to state engineers.

The project began at the end of July and will require the team to be out in the field making trips all over California, broken into thirds—northern, middle and southern regions—in order to spread the work out more evenly over the three-year effort.

“The lion’s share of the work involves being out in the field and collecting data,” Boyajian says, “and then we’ll bring physical samples of the culverts, plus nondestructive data we’ve collected, in the way of ultrasonic measurements, back to campus for analysis.” Some of the samples, he explains, will be analyzed using established techniques of chemistry to better understand the corrosion process.

Zirakian notes that at the end of the project, the team will try to come up with mathematical models to more accurately predict the service life of CSPs.

And, Maalouf adds, “From a utility standpoint, it would be desirable to ultimately furnish state engineers with a sort of flip chart or nomograph that they can easily refer to for enhanced CSP designs in the future.”

In a fortuitous twist, the first two undergraduates hired for the project were Boyajian and Zirakian’s AIMS2 summer research students (see article, page 5). “We were so pleasantly surprised with the level of these students’ desire to learn the theory and fabricate the physical model that we asked them to join us on our real-world Caltrans project,” Boyajian explains.